Caffeine during pregnancy – what are the risks?

You are here: Home / Blog / Caffeine during pregnancy – what are the risks?

Caffeine during pregnancy – what are the risks? 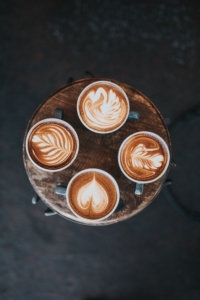 Many people can’t get through the day without their coffee fix, however for pregnant women a high caffeine intake may have negative health effects on both mum and baby.

Caffeine is a compound that is found within foods, drinks and substances such as coffee, tea, coco-cola, energy drinks, chocolate and some cold and flu medications. It is a stimulant and effects the nervous system, by increasing heart rate and increasing alertness, however effects vary from person to person.

Caffeine is quickly absorbed into the blood stream after ingestion and crosses the placenta freely. Studies have shown that after 200mg of caffeine, blood flow in the placenta was reduced by 25%. It is important to note that all individuals metabolise and break down caffeine at a different rate, so the risks outlined here will vary between individuals.

What are the risks?

Reduced foetal growth- Observational research, following over 2000 women across a 3 year period, from pre conception to after birth, showed that there was a significant trend between caffeine intake and reduced foetal growth. The risks increase as caffeine intakes increase, and a daily caffeine consumption of more than 200mg was associated with 60-70g reduction in birth weight.

Miscarriage – studies have found that caffeine intakes of more than 200mg daily could increase the risk of miscarriage, this association was stronger among women without history of miscarriage.

Decreasing iron absorption – Absorbing iron from food is vital for all of us, however as a pregnant women’s iron intakes are increased to 16mg a day, this is even more important. Iron is required for baby’s brain development, lean tissue development and building a healthy blood supply. Consumption of caffeinated drinks (tea, coffee) with food sources of iron can significantly decrease the absorption of iron.

Narrowing of blood vessels – Caffeine increases the release of substances that cause the blood vessels to narrow (vasoconstriction), narrowing the blood flow to the placenta and a reduced amount of oxygen reaching the foetus.

*Caffeine does contain some antioxidants that destroy free radicals in the body, and contains several important nutrients including vitamins B2, B5, magnesium potassium and manganese. However, these nutrients can be obtained from other sources such as vegetables, fruits and whole grains for example.

How much is too much?

Due to variations in caffeine content found in different forms and brands of tea, coffee and chocolate, it is hard to come to a definitive answer to this question. Research suggests that more than 100-200mg daily significantly increases risks noted above, with risks increasing with higher caffeine intakes of more than 300mg daily.

On average, a 230ml brewed cup of coffee contains about 95mg caffeine, however depending on the quality and roasting method of the coffee beans, some may contain up to 170mg. A typical 230ml cup of tea (including green) can contain between 25-50mg of caffeine.

This site uses "gluten free" cookies. By continuing to browse the site, you are agreeing to our use of cookies.